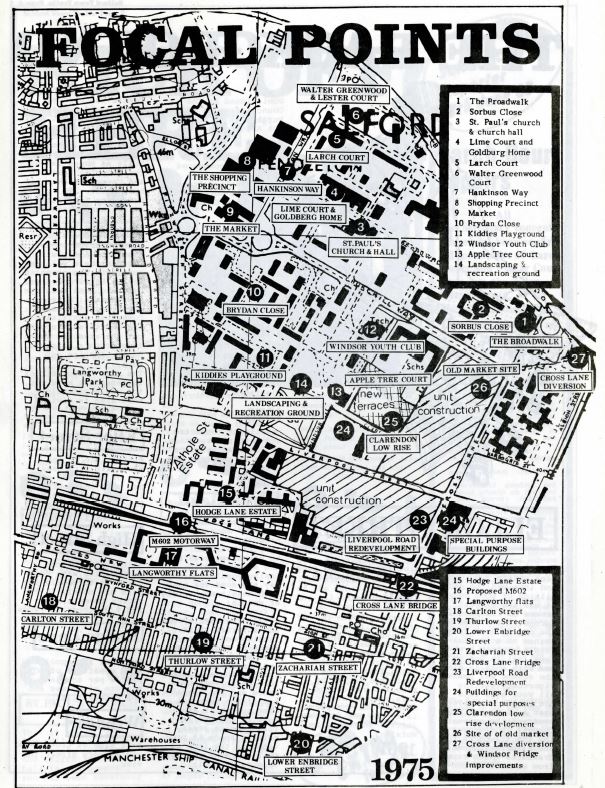 Browsing through the University of Salford’s archives the other day I came across a booklet for an ‘Ellor Street & Dock Ward Trail’. It was put together by the Community Services arm of the University’s Students Union, and was first devised in 1973, although this version dates from three years later. It seems to have been one of a small number of trails designed, at least initially, to give students at the University a better idea of the area and community in which they were living and studying. By 1976 the trails were bein aimed at school groups and school teachers as an educational resource.

What is interesting about the trail is that it was written, designed and promoted at a time when the Ellor Street and Hankey Park redevelopment was a live issue and very much taking place. And what’s clear from the language in the booklet is that the writers were using the trail to turn a critical eye towards what was happening.

In the introduction to the trail we learn that the ‘Ellor Street redevelopment area covers 300 acres and involved the demolition of 6000 houses’, and was reputed to be the biggest scheme of its kind in Europe at the time. An illustration on the page, cartoon in style, depicts a man from the local government using a sweeping brush, under the auspices of a compulsory purchase order (CPO) to vigorously brush away existing housing from the board. We see individual houses toppling over the edge, with what looks like silhouettes of people dangling and trying to hold on.

There are 27 points of interest along the trail starting from The Broadwalk, formerly the site of Ellor Street, moving anti-clockwise to Hankinson Way and the Precinct to the west, going over the M602 motorway to Langworthy Flats and Lower Enbridge Street in the south, and then back up east to Cross Land and Albion Street. At each location, readers are asked questions to get them thinking about the impact of the changes that have happened on the lives and experiences of the people who lived there.

Point 6 for example takes in Walter Greenwood Court, a 15 storey tower block built in the early 1960s to replace the terraced housing that was cleared. The block has now been demolished, but according to the trail, by 1976 many of the one bedroom flats were home to elderly residents, many living on their own. Readers are asked to consider:

What do you think? Did you live or visit Walter Greenwood Court? What was your experience of the building? Get in touch to let us know