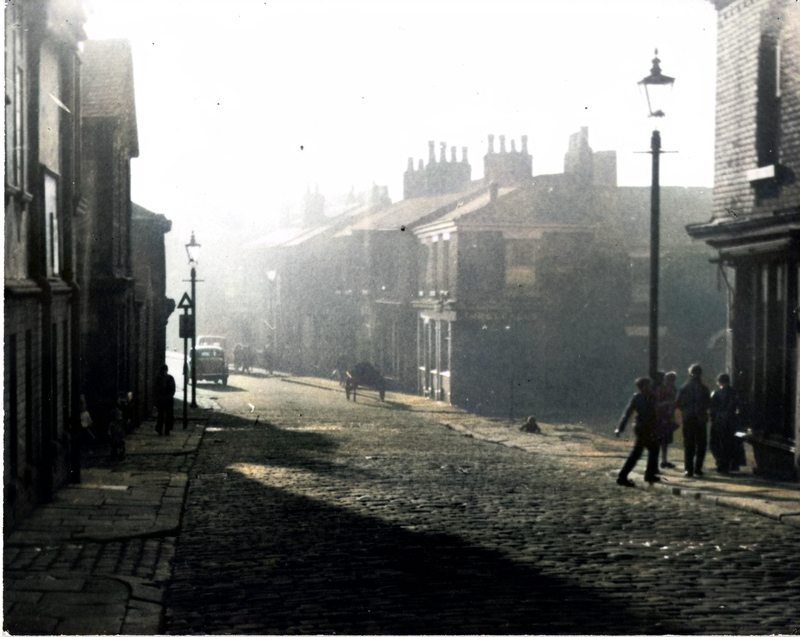 Between 1950 and 1952 several newspaper articles in The Manchester Guardian appeared that described the condition of houses in Salford. Among them is “Tremendous” Cost Of Repairs To Slum Property” published on  December 4, 1952.

It describes a peculiar, yet apparently common practice that was a result of the then long-standing plans to undertake slum clearance and demolish many houses in Salford.

Salford had already had plans to demolish “Slum Houses” since the 1930 but these had not been executed and were picked up again in the early 1950s. As a result, landlords had stopped repairing properties, leaving tenants in deteriorating houses. The Guardian had reported on this already in 1950 and asked whether this was legal, the Town Clerk – H. H. Tomson – said “landlords certainly had some obligations but they could not be expected to spend large sums on houses which were going to demolished.” The council realised that the situation was problematic for tenants and an application to the Ministry of Housing was approved to increase the allocation of new houses. I could not find any follow-up to this article and don’t know if an application was made and what the outcome was.

Judging from the 1952 article “Tremendous” Cost Of Repairs To Slum Property” the problem persisted. Although between 1950 and 1952 slum clearance had commenced and a 20-year plan had been developed by Salford’s Medical Officer of Health Dr. J. L. Burn and the City Engineer – Mr. W. Albert Walker, existing houses were being repaired by the city.

At the time, condition were so bad that the chairman of the building and development committee S. C. Hamburger explained that 20,000 houses in Salford should be demolished immediately and 35,000 were built before 1890 and had no hot water and bath.

A ‘slum clearance scheme’ was approved in April 1951 with the plan to demolish altogether 12,355 and to replace them with modern ones. In the meantime, the council was looking for

This 1951 article responded to the ongoing problem that repairs to the deteriorating houses were not done so that some tenants needed to be rehoused.

In November 1952, finally, The Manchester Guardian published an article alerting to £80,000 that Salford Corporation had spent on repairing ‘Slum Property.’ Repairs had to be done under the Public Health Act which seems to indicate that houses were in such disrepair that they endangered the wellbeing or perhaps lives of tenants. Here, the issue of owners not carrying out repairs because houses were to be demolished appears again. The city did the repairs because the owner weren’t “doing the job.” In addition, landlords of about 450 houses had ‘disappeared’ and because of housing shortages all houses were occupied so that the corporation had to carry out repairs in absence of landlords. Costs were now recouped from tenants in instalments. The disappearance act seems to have been a common practice:

As a result, the new owners could be taken to court to pay for repairs but this would not yield results as they have no income/funds. In the meantime, tenants did not pay rent but were liable for rates. Their contribution was, however, unlikely to repay the expenses spent on repairs.

This outline gives a little bid of insight to what was discussed at the time. It is, however, only an account of one newspaper and therefore not comprehensive.

The 1950s are obviously quite long ago but I wonder if anybody has a family story about such a ‘disappearance act’, about being housed in lodgings and in overcrowded conditions?