Along with my tutor, Dr Adam Galpin, I attended the second ever screening of “Many Worlds” at the BBC Dockhouse in MediaCityUK in room fittingly named the “Alan Turing Imaginarium”. “Many Worlds” is an experimental experience in movie-going, where the audience reaction decides the end of the film. The film was created and discussed by Alexis Kirke in (conjunction with Plymouth University) and the event was hosted by Ian Forrester from the BBC R&D department. 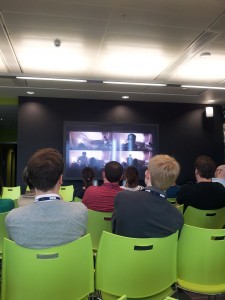 Four members of the audience were wired up with biosensors to measure their emotional arousal levels (Heart Rate, frontal EEG (brain), GSR (perspiration), & EMG (muscle response). We were then shown a 15 minute film. Before the film, their base level of arousal was measured. Then, during the film, at first ‘decision point’ their arousal level was automatically compared to a pre-determined arousal threshold to determine the next scene shown, and again at a second point to determine the final ending of the film. A bit like one of those “choose your own adventure” kids books, but a movie, and for adults. If arousal levels decreased, a more “stressful” or arousing ending was shown. As there were two decision points, there were 4 possible endings. We then watched the same movie again where all 4 possible endings were shown simultaneously. 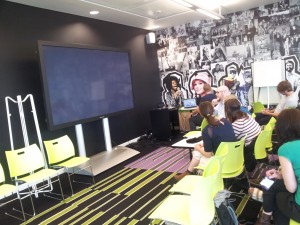 Part-science experiment in itself, part artistic comment on society’s obsession with documenting our life on social media, part explanation of quantum theory, the film explored the idea of Schrödinger’s cat box experiment (1935) and the idea that “the observer affects the observed”. It could perhaps also be viewed as a cinematic reflection of Goffman’s (1959) theory of self-identity, which noted that we adapt by portraying different selves in different social situations.

One of the main problems with predicting emotion through biometric arousal measures is that they only give a measure of magnitude of arousal, not positive or negative direction. In other words, you can’t tell if the audience are happy, sad, stressed or scared etc. Alternative measures could examine other predictors such as the audience’s facial expressions or body language during the film. Another option could be the inclusion of eye-tracking which measures attention rather than emotion… a future feature of Google Glass? Eye-tracking software could detect when the viewer’s focus is shifted away from the target and a film or educational program could automatically jump to the action scenes or a more interesting fact or even make a loud noise to attract attention.

So is this the future of cinema-going?

Probably not, as I don’t think this sort of set-up, where the audience determines the ending, translates well for a shared cinema experience. Although seemingly another shift of power from the broadcaster to the consumer, extending McQuail’s proposition of an ‘active audience’ (McQuail, 2010), the power is not fully in the hands of one single viewer. Would you let a room of strangers decide what you see on screen? In Western society, more choice is associated with having more control (Schwartz, 2004), which is associated with greater life satisfaction (Deci & Ryan, 1985). However, in seeming contradiction, too much choice has been linked with anxiety and a decrease in motivation to participate (Schwartz, 2004). In this scenario, we may feel as if we are “missing out” by not seeing the other options for the final scene.

However, I do feel it has potential for the more personal experience of solitary viewing, where the control is somewhat returned to the individual viewer. This will increase viewers’ sense of autonomy and also their sense of relatedness by being emotionally in sync with the film. Autonomy and relatedness are two important factors that contribute to self-esteem, as described by Self-Determination Theory (Deci & Ryan, 1985). (The third factor, competence, will come at the end of the film if they feel they successfully controlled the film leading to an acceptable ending scene.)

What are the implications for the audience?

Well aside from the ethical considerations and minor discomfort of collecting biometric data, there may be other underlying issues. When theories of media selection are considered, if the film determines the ending according to emotional reactions, we may end up repeatedly viewing the same kind of endings to all the films we see. This could create a “spiral” of selective exposure (re-experiencing the same types of content) and subsequent negative media effects (Slater, 2007). These well documented, small but significant negative media effects include, but are not limited to, increased aggression and negative body image (for a review see Villani, 2001). If this pattern is considered from a lifespan perspective, Cultivation Theory suggests that this could have long term influences on beliefs about the world (Gerbner et al, 1986), with the content viewed framing beliefs and leading to negative effects including ‘mean world syndrome’, fear of crime and stereotype-led attitudes (for a review see Morgan & Shanahan, 2010). There is also the loss of the element of artistic vision. A filmmaker creates a film with a message in mind that they wish to impart to the audience. If there are multiple endings then which is the intended version? Which will the audience see and could the intended message be lost?

Most intriguing are the other potential future applications. I’m sure the “adult” entertainment industry can think of a few…. But more interestingly, I believe it could have applications in the therapeutic and clinical psychology sphere. For example in anger management, mood management and relaxation, the process could be reversed where the more stressed the viewer is, the more calming the clip they are shown. This could also be used for treating phobias with incremental exposure therapy. Or perhaps the TV can sense our mood and offer us options to suit? Mood Management Theory dictates that we often select media triggered by our evaluation of our emotional state as we try to change or extend that mood (Zillmann, 1988). The market research possibilities for the advertising and product development industries are endless. The movie industries can also benefit. Imagine being able to road test a scary movie during production so you know when and where to add those “jump out of your seat” moments! There may even be potential in the gaming industry where the decision-based format is more fitting.

Alexis Kirke is currently extending the project and applying the idea to musical experience and we are definitely going to see something related to this in the near future as the BBC are working on their own similar project called “perceptive media” so watch this space!

For more information, watch an explanation of the “Many Worlds” short film by its creator Alexis Kirke:

This film originally premierred at Cornerhouse Manchester, did you attend? What did you think? Or maybe you just want to discuss the implications of audience-decided film endings? Why not tweet me your thoughts @DMmediapsych