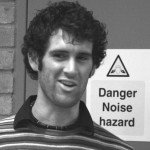 Jonathan was awarded an MEng in Engineering & Computing Science from the University of Oxford in 2000 and a PhD in Acoustic Engineering from the University of Salford in 2007, where he remained as a post-doctoral researcher and was subsequently appointed a lectureship in 2015.  The title of his PhD thesis was “Time Domain Boundary Element Methods for Room Acoustics” and this remains influential in his current research areas. In particular he is interested in the development of improved acoustic modelling software, which properly includes wave phenomena, and its interfacing to audio hardware, enabling the sound of buildings to be experienced before they are constructed or long after they are lost, a process known as auralisation. In this area he was Researcher Co-Investigator on the EPSRC funded project “Enhanced Acoustic Modelling for Auralisation using Hybrid Boundary Integral Methods” from Oct 2012 to Sept 2015, in partnership with the University of Reading, Arup Acoustics and BBC Audio R&D. Jonathan has had the pleasure of being involved in a wide variety of public engagement activities, including a number of TV appearances, and is passionate about performing, engineering and enjoying live music.